Share a memory
Obituary & Services
Tribute Wall
Read more about the life story of William and share your memory.

Martin graduated from the University of Waterloo in 1971 and began a two-year stint in Canadian University Services Overseas (CUSO) in Sierra Leone, West Africa. He taught chemistry at the Government Boys Secondary School in Magburaka and adopted a stray mutt he named Johannes Sebastian. Martin could have filled a book with Sierra Leone stories ranging from driving his motorcycle off a bridge, hiding from an invasion of Driver Ants, to meeting his future wife, Jennifer.  However, the stories were better told orally with all their accompanying voice expressions and actions.

Martin and Jennifer (Klema) married in 1973 at Messiah Lutheran Church in Roseau, Minnesota, and made their home in Sarnia where Rebecca was born in ’75 and Luke in ’76. Two babies, a Chevy van, and the ever-present stereo in tow, Martin and Jennifer left Southern Ontario and headed to Fort McMurray, Alberta, and the Oil Sands Project just before Christmas 1976. More wonderful years followed in Saudi Arabia and West Texas.

In 1986, a new chapter of life and work began when the family flew to Wellington, New Zealand, to participate in a Youth With A Mission Discipleship Training School; work continued in Narita, Japan, with language learning and partnership on a church-planting team. Cataclysmic life change for the entire family came February 14, 1988, when Martin woke up paraplegic — an undiagnosed staph infection on his spinal cord had caused irreparable damage.  Extensive rehabilitation began in Japan and continued in Hawaii and Singapore along with involvement in the School of Biblical Studies. In 1991, the family returned to Canada to establish an SBS in British Columbia.

It seemed that Martin needed one more big adventure — in 1994 he began law school at the University of Victoria and then practiced law in Richmond, BC, until 2017— the Richmond Courthouse and his office important places to live out his Christian faith. Martin’s first post-paralysis surgery was in 2001 and the ensuing years manifested a journey of both ease and disease, times full of life and near death. His service dogs, Jet and Samson, were faithful companions throughout much of that time. Sam died in March of this year and Becker, his third Standard Poodle, came into Martin’s life in May.

Martin still called fellow CUSO volunteers among his friends along with dear ones from Fort McMurray, Saudi Arabia, West Texas, the YWAM years, Vancouver area, here on the Island, and at Rivendell Retreat. Cribbage, anyone? Chess? Or his new favourite, Quirkle? Many lives in many situations and locations were touched by Martin’s courageous and full life. Uncle Martin was both irritant and example to his nieces and nephews and will be missed by them and so many more.

He always said, “If I’m not dancing in Heaven, God will have some ‘splaining’ to do!”  But having his druthers, we’re sure he’s riding a new red motorcycle at full tilt.

Martin’s memorial service will be held Monday, November 7, 11am at Our Saviour Lutheran Church, 6340 No 4 Road, Richmond. His ashes will be placed at his beloved Rivendell on Bowen Island along with a Western Red Cedar.

In lieu of flowers please consider a gift in Martin’s name to Brigadoon Service Dogs. You can donate online:

To send flowers to the family or plant a tree in memory of William M. Cuthbertson, please visit our floral store. 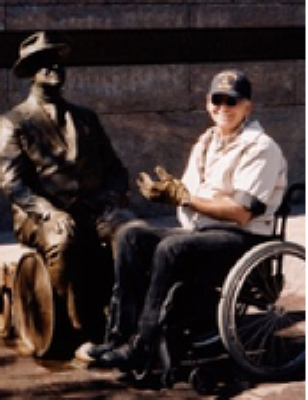 You can still show your support by sending flowers directly to the family, or by planting a memorial tree in the memory of William M. Cuthbertson
SHARE OBITUARY
© 2023 Helgeson Funeral Home. All Rights Reserved. Funeral Home website by CFS & TA | Terms of Use | Privacy Policy | Accessibility