Share a memory
Obituary & Services
Tribute Wall
Read more about the life story of Jerry and share your memory.

Jerry Lee Hennum passed away peacefully in his sleep on November 14, 2022, at his home on one of his favorite places on earth, the Rainy River. He was 68 years old.

Jerry was born in Grand Forks, ND, on January 15, 1954, to Gerald and Lila (Lundquist) Hennum.  He was baptized and confirmed at Maria Lutheran Church in Kennedy, MN.  Jerry graduated from Kennedy High School in Kennedy, MN. He attended Concordia College in Moorhead for one year and furthered his education by obtaining a two-year associates degree for finance and agriculture at the Northwest Technical Institute in East Grand Forks, MN.  After college he obtained his commercial pilots license and U.S. Coast Guard Captains License.  On April 6, 1974, Jerry married LuAnn Johnson at Red River Lutheran Church in Hallock, MN. They were blessed with three children – Jaclyn, Greggory, and Christopher. His love of the lake started when he took his first boat ride at six months old. Starting at a young age, he spent summers at his parents cabin near Riverview Resort north of Baudette.  His first job was dock boy at the age of 11 followed by fishing guide at age 14.  In his adult years, he farmed with his brother-in-law, Charles Swanson for a number of years.  He started his 37 year resort owner career on Lake of the Woods in 1985 at Angle Inn Lodge on Oak Island.  After selling Angle Inn Lodge, he went on to also own and operate Sportsman's Lodge and Sportsman's Eagle Ridge for many years along with various other businesses.  At the time of his death, he was one of the owners of Sportsman's Oak Island Lodge and Angle Inn Lodge. In his retirement, he enjoyed custom harvesting for Sugden Harvesting and driving boat for the Lake of the Woods Passenger Service. LuAnn and his family meant the world to him.  He loved spending time hunting with them and hanging out at deer camp, spending time at Oak Island, fishing off the dock, watching the grandchildren play hockey, traveling, and winters in the southern U.S.  He also spent time being a flag man at the Kittson County Speedway, watching NASCAR races, many trips to cheer on favorite driver, Dale Earnhardt, Sr. and  20 year tradition of Walleye Wednesdays at Antler Acre Deer Camp. Jerry was a very outgoing guy who lived life to the fullest. He was a guy known for his jokes, pranks, and one-liners. He always told us to “Giver heck” or “that’s great” or to answer the phone with “yeahhhh! Jerry was a member of Wabanica Lutheran Church in Baudette and past member of the Red River Lutheran Church in Kennedy, MN. He was a board member of the Lake of the Woods Tourism Bureau and past board member of the Red River Lutheran Church and Kennedy Lions Club.

He was preceded in death by his parents Gerald and Lila; father-in-law, Don Johnson; and brother-in-law Kim Turner.

If you wish, Memorials can be sent to Border Bank, PO Box 1089 Baudette, MN 56623, made out to the Hennum Family for the Hennum Wave Buoy Fund  to make Lake of the Woods a safer place for boaters or any cause that may be close to your heart.

To send flowers to the family or plant a tree in memory of Jerry Lee Hennum, please visit our floral store.

Your browser does not support this video format. You should be able to view it in Chrome, Safari or Internet Explorer. 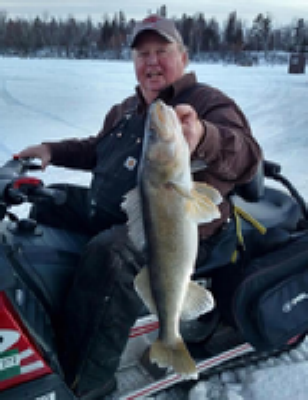